The Memorial Garden was designed to be a space where members of the First Parish Community could remember their loved ones, whether through meditative reflection, the scattering of ashes, or memorializing names in the etched glass of the windows overlooking the garden. 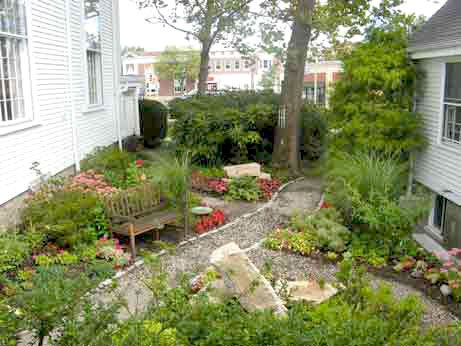 If you are interested in commemorating someone on these windows, please complete the order form below.

If you have questions, please contact the Memorial Garden Committee at memorials@uuneedham.org or the Parish Administrator at 781-444-0823.

Virginia Green Strong (1920–2006) joined First Parish in the 1970s and was a faithful member and friend. The Memorial Garden was made possible by a bequest from the Strong family.

Members of First Parish designed the garden and did most of the landscaping. The space incorporates several large pieces of granite that were unearthed during the construction of the new Parish Hall in 2007-2008 and appear to have been part of the 1927 renovation.

The following words, which Ginny Strong kept taped to her refrigerator door, were read at her memorial service:

To laugh often and much;
To win the respect of intelligent people and
…. the affection of children;
To earn the appreciation of honest critics and
…. endure the betrayal of false friends;
To appreciate beauty, to find the best in others;
To leave the world a bit better, whether by a
…. healthy child, a garden patch,
…. or a redeemed social condition;
To know even one life has breathed easier
…. because you have lived.
This is to have succeeded.

Fill out my online form.
×

Please select one or both of the Newsletters listed below: